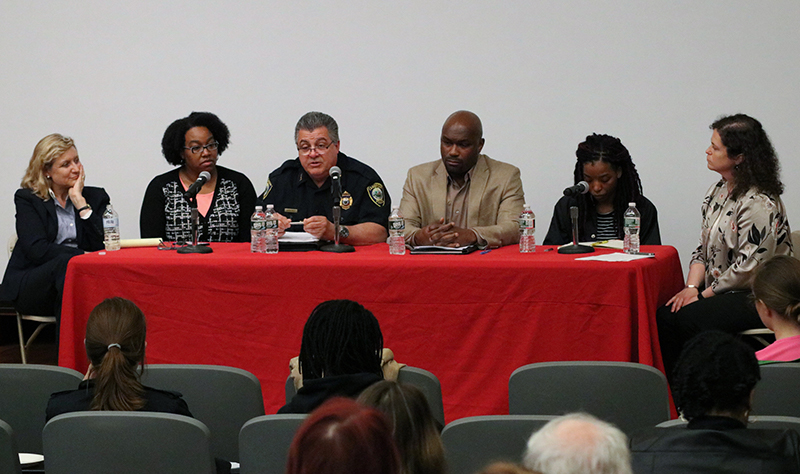 The school-to-prison pipeline refers to a trend in which punitive school disciplinary policies and practices increase the likelihood that children will become involved with the criminal justice system. This is a critical public health and racial equity issue as it disproportionately affects low-income students, students of color, and students with disabilities and mental health conditions. On April 22, 2019, the Center for Innovation in Social Work & Health and the BUSPH Center of Excellence in Maternal & Child Health hosted an event that explored the causes of and potential solutions for this problem, featuring experts from a variety of disciplines. Following are some highlights of the conversation; watch the video of the entire event.

Lois McCloskey, director of the Center of Excellence in Maternal & Child Health, gave welcoming remarks. Lisa Thurau, executive director of Strategies for Youth, a non-profit that trains police to improve interactions with youth, then gave an overview of the social and political context underlying the school-to-prison pipeline. She described child welfare problems as a “canary in a coalmine” and symptomatic of larger failings in society, such as unemployment, unstable housing, mass incarceration, and lack of access to healthcare. Too many children are not having their basic needs met and are encountering violence in their neighborhoods, Thurau said, which leads to toxic stress and trauma. When youth act out, teachers and school police are often ill-equipped to provide appropriate support—public schools are being defunded, and only 12 states require any training for school police, said Thurau.

Ritchina Daniel, a senior high school student at Pioneer Charter School of Science and intern at Massachusetts Advocates for Children, gave a first-hand account of the problems she has witnessed at her school. Discipline was a big focus, said Daniel, which particularly affected students of color. “A lot of the practices that I saw were pushing my peers away from education, ignoring our personal needs for extra services and help. A lot of my peers were dealing with stuff at home and dealing with poverty,” said Daniel.

Leon Smith, executive director of Citizens for Juvenile Justice, identified two branches of the school-to-prison pipeline. The first is direct, said Smith, in which youth are arrested and brought into the criminal justice system for typical adolescent behavior such as scuffles, that in past years, would not have been criminalized. The second pipeline is indirect, and is a result of youth being suspended from school repeatedly, which causes further disengagement. “There are multiple studies that show that kids are twice as likely to be arrested while they are out of school serving a school disciplinary period,” said Smith.

“When a tragedy happens in the suburbs, we understand that kids need counseling and they get it. In the cities, it’s almost like it’s disconnected.”

Ultimately, suspensions don’t solve underlying behavioral problems, he said. Instead, schools need to be honest about the realities of race and develop cultural competence, as children of color, particularly Black children, are more likely to be suspended, expelled, and arrested in schools. Smith also called for a public health approach to trauma, and gave examples of how violent crime can affect everyone in a community. “When kids begin to act out, we have to have a recognition that a tragedy has happened. When a tragedy happens in the suburbs, we understand that kids need counseling and they get it. In the cities, it’s almost like it’s disconnected,” he said. “We need to do a better job of meeting young people where they are, when things happen, and getting them the support they need so we don’t have them pushed into this pipeline.”

Thurau noted that the school environment and the systems students encounter can in and of themselves traumatize children. Youth at the intersection of race and disability are particularly vulnerable, said Smith, even though federal special education law states that students should not be punished if a behavior is a manifestation of their condition. Smith and Thurau discussed examples of youth with cognitive or emotional disabilities being threatened with arrest or brought to arraignment.

Dep. Superintendent Leonardo DiPietro of the Cambridge Police Department discussed the department’s Safety Net Collaborative, which started in 2007 with the goal of keeping youth out of the criminal justice system. The program has reduced youth arrests by 70%, with no juvenile arrests made in Cambridge in 2018. “Statistics told us that 70% of youth that are incarcerated are actually suffering from a diagnosable disorder,” said DiPietro. “We were arresting too many young men, mostly of color, and we had to do something different.”

To implement the new program, the department hired a youth psychologist, partnered with Cambridge Public Schools and the Department of Human Services, and hired new “youth resource officers” trained in mental health and case management, who worked in schools and in the community. “These officers were not disciplinarians,” said DiPietro. Instead, if a child came to the attention of the Cambridge Police Department for risky behavior or committing a crime, they would be referred to community services to avoid arrest and keep them out of the justice system entirely. “If a kid’s been arrested, they’re seven times more likely to recommit an offense again,” said DiPietro. “Even just bringing them into the system those numbers spike up.” He believes Cambridge’s program can be replicated in other cities, and has visited police departments around the U.S. to discuss it, with varying levels of reception.

“We started having everybody question, is it necessary to come down like a hammer for every kind of behavior? Would you do this to your own kids? The answer was no.”

Marcia Gupta, a social worker and integrated pediatric behavioral health program coordinator for the Dimock Community Health Center, described the mental health services Dimock provides for youth both in schools and at clinics. She discussed the importance of getting to the root causes of a child’s behavioral issues instead of jumping to a conclusion—such as ADHD and medication. “It could be ADHD, but it could be trauma, it could be anxiety, it could be depression,” she said. Dimock also educates school staff about mental health diagnosis and strategies for intervention, as well as how to encourage a culture where families feel comfortable sharing information, said Gupta. She gave the example of a young man who was having difficulty concentrating in school one day because his mother was having surgery. “Finally somebody said to him, ‘what’s going on for you?’ And he said ‘my mom is in the hospital,’ and they were like, ‘I totally get where you’re coming from today.’” The student was allowed to call his mother and talk for a few minutes, and afterward, was able to continue his day.

Thurau discussed the need for evidence-based training, and the work Strategies for Youth does with police departments. “We started having everybody question, is it necessary to come down like a hammer for every kind of behavior? Would you do this to your own kids? The answer was no,” she said. Thurau also found that many police departments had no policy for working with teenagers. “The default was if you’re not a child, you must be an adult,” she said. Yet the teen brain does not have “sufficient brakes, pro and con thinking, and calm rational thought,” said Thurau—qualities that are developed “around 25 if you’re lucky.”

Ultimately, ending the school-to-prison pipeline will require not only training and an honest assessment of the role of race, but also a significant shift in policy and the allocation of financial resources. “As you look at cities that have some of the highest incidents of trauma, they’re large, urban, cash-strapped districts, and the first thing that gets cut are the social workers, the paraprofessionals, the support staff,” said Smith. “If we understand the importance of this, we have to invest in resources for outside agencies to come in for ongoing training.”

This event was part of the Social Work in Education Program, generously supported by Sharon Cerny, SSW ’71.

Article and photos by Nilagia McCoy of the Center for Innovation in Social Work & Health.