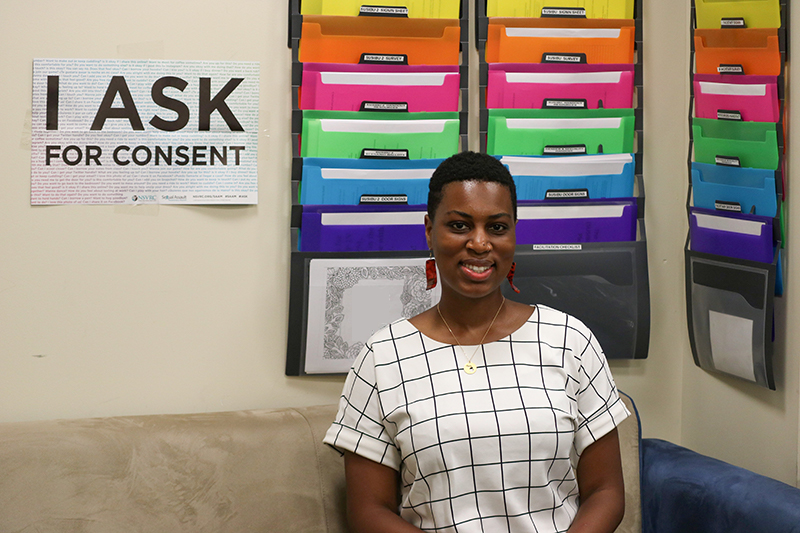 Sexual assault affects one in five female college students, with LGBTQ+ students facing a greater likelihood of assault. In recent years, colleges nationwide have responded with new Title IX policies and resources to support survivors medically, psychologically, and legally. Yet prevention remains an area for improvement.

“It’s not that common to have violence prevention resources on campus,” said Ashley Slay, (SSW’16), prevention program administrator at Boston University’s Sexual Assault Response & Prevention Center (SARP). Only 61% of colleges report having a prevention program. Slay, who is a macro social worker, looks at the problem through the lens of systemic change. “How can you use an individual person’s experience—that you are seeing multiple times over in other people—to create a solution?”

SARP, a part of BU’s Student Health Services, provides undergraduate and graduate students with trauma-informed counseling, a 24-hour crisis hotline, and assistance in navigating medical care, law enforcement, and academic resources. These services for survivors are provided by four crisis counselors—three social workers and one psychologist.

The prevention programming that Slay oversees includes student-led outreach, educational sessions, and skits based on survivor accounts, which are held throughout the academic year, including events such as freshman orientation, Domestic Violence Awareness Month (October), and Sexual Assault Awareness Month (April). “Young people can come in with a lot of stereotypes and preconceived notions of how sexual violence happens. Unpacking and challenging that is very important,” she said.

Social work is not about telling people what’s right, it’s about talking to them and finding out what they believe is right, what is going to be the best solution to their problem.

Slay, who was previously a youth outreach coordinator at the Boston Area Rape Crisis Center, educates and empowers student ambassadors to talk with their peers about topics like consent and bystander intervention. “They are the faces communicating the messages to students,” she said. She hosts weekly meetings for ambassadors that cover topics like racism and poverty, and how they intersect with sexual violence so they have “a well-rounded way of addressing the issue. If students ask them, ‘what about this?’ they can [answer questions].”

At the same time, Slay also learns a lot from the student ambassadors. The SARP office was established in response to student activism, and students plan the events, deliver the curriculum, and often teach her about new aspects of intersectionality. “Social work is not about telling people what’s right, it’s about talking to them and finding out what they believe is right, what is going to be the best solution to their problem, and saying ok, these are the tools I can contribute—there’s a lot of collaboration.”

Slay noted that her macro social work background—which has roots in community organizing principles—adds a valuable, complementary perspective when addressing public health problems. “Public health and social work share social justice values, but there can be some differences in their approach. There’s a perception that public health folks come up with plans and focus on process, while social workers think about how a plan is going to play out in the communities being impacted. Social workers start from the center and build out, whereas public health people start outside and build in.”

This article is part of a Center for Innovation in Social Work & Health (CISWH) series that highlights success stories about social workers working in healthcare and public health to address the non-medical factors that impact health, known as social determinants of health. Know of a healthcare team that’s doing innovative work involving social workers? Contact us—we want to hear your story.

Article and photo by Nilagia McCoy, Center for Innovation in Social Work & Health.