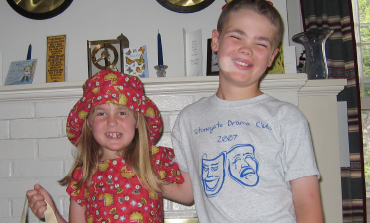 Rylin and David Rodgers were shocked at how quickly medical debt changed their lives. They had college educations, good jobs with health insurance, and comfortable savings before their children were born. Unaccustomed to asking for help, Rylin once went three days without eating as she sat by her son’s hospital bed. “In retrospect I should have asked,” she says, “but no one offered, either. I think we looked ‘too good’ to need help.”

Rylin and David Rodgers were in good financial standing when they welcomed their first child, Matthew, into the world. Both teachers, they had a combined yearly income of $60,000, owned their own home, and had zero consumer debt.

Six months later, even the ten dollars it cost to park at the hospital where Matthew was having surgery was well beyond the family’s budget. “I would get up at 2:00 a.m. to go move the car,” remembers Rylin. “There was no parking attendant there at that hour.”

In just the first year of Matthew’s life, his medical expenses would total over a million dollars.

Matthew and his sister Laura both have an unidentified type of mitochondrial disease, a degenerative and terminal illness. Rylin had to quit her job to care for them, which cut the family’s income in half. Required by their health insurance to pay 20% of all health care costs out-of-pocket, the couple took out three mortgages on their house. They have paid for some medical expenses with credit cards, including $400 a week for laboratory tests and $2,000 a month for prescription drugs.

“Most people assume that a family like ours, because we have two college-educated parents, would have the resources they need to take care of their family’s medical conditions,” says Rylin.

In fact, social workers repeatedly told the family they wouldn’t qualify for assistance because their income was too high. “It wasn’t until Matthew was two and we were in major medical debt that we learned from another parent we’d been income-eligible the whole time for CSHCS.”

CSHCS, or Children’s Special Health Care Services, is Indiana’s Title V program. Once they enrolled, it helped the Rodgers pay for the children’s medical care for several years. When David received a pay raise, however, his income was pushed over 250% of the federal poverty level, and the family was no longer eligible.

“Most people assume that a family like ours, because we have two college-educated parents, would have the resources they need to take care of their family’s medical conditions.”

By trimming their grocery budget to $40 a week for the family of four, buying second-hand clothes, and foregoing non-essentials, the Rodgers are able to pay $500 a month for the nutritional supplements that Rylin says are the only recommended treatment for the children’s condition. Neither Medicaid—which Matthew now receives, after ten years on a waiting list for a special waiver program—nor the family’s private insurance covers any part of the cost.

The Rodgers have had to make other difficult choices and adjustments. When they couldn’t afford the muscle biopsies required to diagnose the children’s condition, which were not covered by insurance, they chose to have just one child diagnosed. When wheelchair maintenance grew to thousands of dollars a year, they got the children scooters instead. And while four different subspecialists want to see Laura every month, she usually goes every three months. “I try to balance appropriate medical care with reality,” says Rylin.

One choice they didn’t make: “We were shocked by how many people advised us to divorce so we could get Medicaid.”

This story first appeared in Breaking the Link Between Children’s Special Health Care Needs and Financial Hardship in February, 2009.

Read Rylin Rodgers reflections on the impact the Affordable Care Act has on her family’s well-being in a June 2013 article.