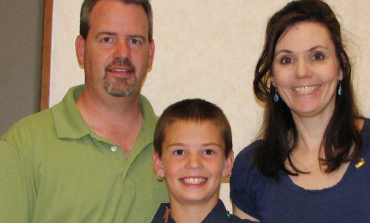 Eleven-year old Chance’s cochlear implants don’t get in the way of him doing all the things he loves: playing soccer, going camping with his scout troop, and being on the city swim team.   Thanks to his family’s commitment to ensuring that Chance got the services and supports needed, he is doing well in a regular classroom and playing with friends in the neighborhood. However, the path to this success story was long, costly, and filled with many roadblocks.

The Paxton family’s struggle with the private insurance company to get Chance’s cochlear implants covered started 7 years ago.  Taunya, Chance’s mother, can remember the many conversations with insurance company representatives like it was yesterday. It was so difficult for them to find out what insurance plans cover and what to do when they tell you a critical need for your child has been denied.

It can feel overwhelming as it seems there is always a battle to fight, whether it is with the insurance company to get coverage of hearing aids or implants or the city that expects you to pay for ‘Deaf Child In Area’ signs in your neighborhood.

“The woman we talked to who told us that hearing needs were not covered acted as if we should have known that all along and showed absolutely no compassion. Not even an  ‘I’m sorry’ or a soft let down. Just a brisk ‘We don’t cover hearing needs. It’s on page whatever, paragraph such and such, and now I have to go and help other people’ sort of thing.  It was devastating news to receive on top of just learning our child was deaf and had not been hearing us like we thought he was. We knew we needed to get him services, but now we learned that nothing would be covered by our insurance.  And why would hearing needs not be covered?   It just didn’t make any sense.”

The Paxtons felt as though there was such a huge learning curve in terms of understanding what a hearing loss meant to their child’s development, and then having to deal with financial challenges on top of that made it so much tougher.  At the time, the doctor and team that approved cochlear implants for children in their area required kids like Chance to try hearing aids prior to approving implants.  The Paxtons agreed to give them a try. However, as with many private insurance policies, the hearing aids were not covered under their plan. As a result, their family had over $10,000 in out-of-pocket costs in one year, mostly due to Chance’s hearing needs. Norm, Chance’s dad, took on many extra hours to pay for Chance’s medical needs, sometimes working as much as 18 hours a day.

“I considered getting a job to help meet these expenses,” said Taunya. “But it didn’t make sense economically.  There needed to be a parent at home to get Chance to all his appointments with the specialists that were over an hour away, and sometimes there were three appointments a day.  Then there were the communication needs.   I worked with Chance a lot at home, helping to reinforce what he was being taught in preschool and frankly, just helping him learn how to communicate his basic needs. Chance was diagnosed late and had a lot of catching up to do. The preschool was not close to our house and although he was bussed, there were therapy appointments at the school that I attended to learn how to teach Chance language at home.  One of us needed to be home to keep things running and to work with Chance.  I don’t regret the decision for a minute.  I loved being home, but we operated on a skeleton budget.”

One of us needed to be home … to work with Chance. I don’t regret the decision for a minute…but we operated on a skeleton budget.

When it was obvious that the hearing aids were not giving Chance what was needed for language development, his parents worked to obtain cochlear implants. The family was in an 18-month battle, grappling with the multiple denials from the insurance company.  Their evenings were spent poring over insurance records and medical documentation. After learning more about insurance policies and appeals than they ever expected to know, and after exhausting more appeals than they thought they were allowed, Norm engaged his employer’s human resources (HR) representative and learned even a bit more about the specifics of his company’s role in its insurance plans.  He was then able to provide a more favorable perspective in the final appeal, which was ultimately successful. Taunya still has a soft spot in her heart for that particular HR representative.

Once Chance finally received and adjusted to his bilateral cochlear implants, his language development and progress in school started to blossom. Yet their family’s expenses to keep the implants working are ongoing. Costs for replacement parts, batteries, and routine maintenance, for which they purchase insurance through the implant company, average $300 a month. The biggest expense looming is when the cochlear implants need to be replaced.  Children typically need new implant processors every 4-6 years, according to what the implant company has recommended to the Paxtons (to keep up with latest hearing programming technology and maximize hearing potential), but their insurance company will only pay for one set. So Chance’s family will be looking at $17,000 for new implants in a few years. Additionally, an “FM” system is something that has been recommended to improve Chance’s ability to hear all his teacher’s instructions in the often noisy classroom.  Such a system costs around $4,000 and is not covered by insurance.

Given these expenses, the Paxton family goes without many of the “luxuries” that other families may take for granted. During the time they were appealing the insurance company’s denial of Chance’s implants, they meticulously went through every expenditure to see what could be cut. Extracurricular activities such as eating out or signing the other kids up for city youth programs  were nonexistent.  Family vacations were the annual “Implant Camp” sponsored by the Colorado Neurological Institute. What was going to be a 4-bedroom house is still a 3- bedroom house for 7 people, as the basement still isn’t finished. Additionally, Chance’s parents put some of their own needed health care on hold, such as not going to the dentist, to minimize health care costs. Although Chance has had his implants for over 5 years now, his parents are still playing catch up on many things that went on hold since they were making sure Chance got what he needed.

Still, Taunya’s final message to other families is one of hope. “Having a child with a hearing loss is a process, and most of us are on a big learning curve as we learn what our children’s needs are and access the help that they need.  It can feel overwhelming as it seems there is always a battle to fight, whether it is with the insurance company to get coverage of hearing aids or implants or the city that expects you to pay for ‘Deaf Child In Area’ signs in your neighborhood.”

“You will have to fight for things that your child needs, but who better to lead that battle than parents who are passionate about what their child needs? Hopefully with enough of us going to battle, the next generation of parents of deaf kids will not have to fight as hard.  There are marvelous people along the path who help you guide your child on their journey from audiologists, to teachers to speech therapists.  They are a wonderful source of information and knowledge. As time goes on, it does not seem so overwhelming because you feel like you know a little more about what you are doing.  These deaf kids are amazing and capable of doing anything they set their minds to doing.  The journey is worth it.”

This story is provided with support from the National Center for Hearing Assessment and Management. Many thanks to NCHAM for their work in raising awareness of coverage and financing issues faced by families of children who are deaf or hard of hearing.

This story first appeared in the Fall 2012 issue of of the Catalyst Center Quarterly eNewsletter.